Dancing together since 1996, Oleg Suvorov and Tatiana Pavlova are among the nation’s most notable professional dance teams.

In addition to winning dozens of open professional events throughout the U.S. and the world, the list of their achievements include such prestigious titles as the US National Professional Grand Finalists in 2001, 2002, and 2003, World Cup Finalists in 2003 and 2004, as well as winners of the overall ballroom category at Ohio Star Ball 2002. After over two decades of competing, coaching, and judging, opening their own Orange County dance studio was a natural off-shoot of their passion for ballroom dancing.

Having been a part of the dance industry for over 3 decades, Oleg and Tatiana have developed a unique and effective approach. It allows greatest results in the shortest amount of time in teaching dancers of all levels and abilities. They passionately share their love for social and competitive ballroom dancing with dance enthusiasts of the surrounding communities of Huntington Beach, Fountain Valley, Newport Beach, Westminster, Costa Mesa, and more.

When Oleg and Tatiana first started dancing and working together over 20 years ago, they dreamed of one day opening their own ballroom dance studio, the kind where students would have so much fun that they would never want to leave.

After many years of hard work and planning, Oleg and Tatiana’s dream came true.

Why dance?
As co-founder Tatiana Pavlova says, “Dancing is life!” Ballroom dance classes offer a wonderful way to get fit and have fun through movement. Mastering the skills of ballroom dancing are valuable goals on their own but when you dance, you reap a number of benefits including stress relief, relaxation, self-confidence, romance, and social interaction, just to name a few. Most of our dancers are excited to discover that dancing helps promote better health and overall wellness, flexibility, endurance, and most of all, fun and excitement.
Is ballroom dancing only for “older” people?
There are just a few things in life that can be enjoyed at any age. Whether you are 5 or 105, “Dance All You Can” is what you should do! Individuals and couples that learn to dance can dance for a lifetime so start today.
Why is ” Dance All You Can” the best place for me to learn ballroom dancing?
Our ballroom dance studio offers every amenity you might need to make your group dance classes and private dance lessons fun, easy, and comfortable. Here you will find state-of-the-art facilities, great location, top-notch instruction, and great customer service. Did we mention a FREE introductory lesson?
How do I get started?
We offer a special Free Introductory Private Ballroom Dance Lesson to all of our new students. Contact the studio via phone or email to make an appointment for your first free dance lesson. Free dance lessons make it easy to try adult ballroom dance classes risk-free.
What types of ballroom dance styles do you teach?
We offer a variety of dance styles for social dancing, wedding dancing, and even competitive dancing in Swing, Foxtrot, Argentine Tango, Waltz, Cha-Cha, Salsa, Rumba, Bachata, Two Step and more! With group dance classes, social dance lessons, one-on-one dance lessons and more, there is something for everyone.
Do I need a partner to take lessons in ballroom dancing?
No partner is required for any of our classes or lessons. You are welcome to take private lessons with a partner if you wish, but solo with your instructor is fine too. We always rotate partners in group dance lessons so everyone gets the experience of dancing with different dancers.

Our social dancing events offer plenty of opportunity to meet other dancers with similar interests and goals.
What can I expect in a private dance lesson?
In a private dance lesson, you will get private instruction tailored to your needs whatever level you are dancing at. Private dance lessons allow you as an individual or with a partner to learn at your own pace. In your private dance lesson, you have your instructor’s full attention working on precisely what you need in a fun, stress-free environment.
What can I expect in a group dance class?
Our group dance classes are REALLY fun! In our group dance classes, a number of students benefit from the instruction of a single dance instructor. We utilize group dance classes in addition to private dance lessons to help add new skills in a new way and supplement your private dance instruction. Group classes also give you the opportunity to learn a variety of ballroom dance styles so you can pick your favorites. Group classes can be attended as an individual or a couple and we always rotate partners, giving everyone a chance to hone their skills with a variety of people.
I have no dance experience, will I be able to keep up in the beginning group classes?
Yes! We are experienced in teaching students at all levels to dance. We know it can be scary trying new things but we know how to make absolute beginners feel comfortable in our supportive environment. If you are interested in ballroom dancing, you have to start somewhere and shouldn’t let a little apprehension keep you from experiencing the thrills of learning to dance.
How long will it take to learn to ballroom dance?
It depends on your goals and ambitions. According to your ability, it may take you just a short few lessons to get introduced to a couple of dances of your choice. We can have you dancing with "confi-dance" quickly and then the more time you put into dancing, the better you will become.
While taking ballroom dance lessons, will I have the opportunity to perform or compete?
YES! There are many opportunities available to those who are interested in performing, competing, and showing off their skills in front of an audience. You will never be “required” to perform or compete at our studio, however, we encourage you to give it a try though we know it isn’t for everyone.
Is there a dress code at the ballroom dance studio?
We do not enforce a dress code per-se, but you will always feel better going to your class having freshened up and wearing something smart. Even though ballroom dancing is a physical activity, you don’t want to look like you’re going to a gym.

In addition, a few words need to be said about shoes. You don’t need a pair of special dance shoes for your first few lessons, but having leather shoe soles will give you more control. We ask you to inspect your shoes for slim heels and protruding nails as well as marking soles in order to protect our beautiful dance floor.
Why do I need to cancel my appointment at least 24 hours in advance?
In order for us to accommodate your availability while booking your private lessons, we have to reserve our instructors' time. So, when a cancellation is made at the last minute, it is almost impossible for us to book that time with someone else. However, we will give you the opportunity to make that appointment up before the end of the week or double up the following week.
How expensive are your dance lessons?
We love teaching people how to dance and as such, strive to make ballroom dancing affordable and accessible for everyone. We offer a flexible schedule and payment plans that will best suit you and help you meet your personal dancing goals whether it’s social dancing, wedding, competitive dancing and more. For specifics on the ballroom dance programs we have available, call or email us and let us tailor a program to meet your individual goals and budget. 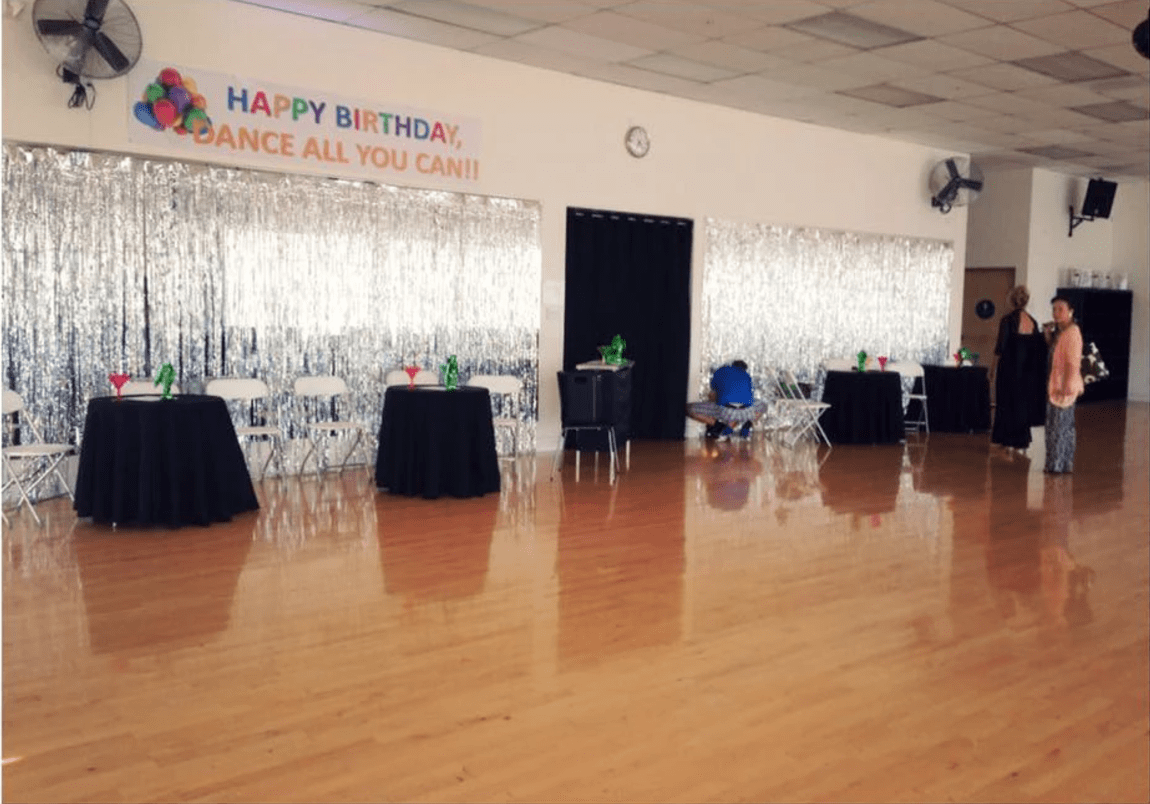 Our beautiful studio was originally opened in June 2013 and moved to the present location in August of 2021. It is located in Fountain Valley, just across the city lines of Huntington Beach, Westminster and Newport Beach.

The name dating back to 1996 literally means any of the following:

Every Great Journey Begins With A First Step!

Prepare For A Special Event

Looking For An Unforgettable Date Night?

Only $50! Enjoy a 50% off of a Regular Private Lesson. Take advantage of a 45 minutes of undivided attention of our skillful instructor. Work on a dance of your choice